Home » Congress Pulls Taxpayers Up From the Abyss 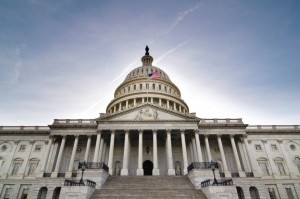 In case you missed it, we fell off the fiscal cliff on January 1, 2013. However, less than twenty-four hours later, Congress passed the American Taxpayer Relief Act of 2013 (“ATRA”), reinstituting the Bush income tax cuts for most Americans and “permanently” fixing the estate tax.

While the last minute passage of the bill was a relief to nearly all Americans, one must wonder how permanent this reprieve will be. The President is already talking about taking a “balanced” approach to cutting the deficit (read that to mean an increase in taxes of some kind). History has shown that Congress often looks to the estate tax when it desires to raise additional revenue.

In 1797, Congress passed the Stamp Act as a means to raise revenues to fund a navy to defend the nation against an undeclared war with France. The stamps were required for wills offered for probate as well as letters of administration where the estate was larger than $50. The tax was repealed in 1802.

To help pay for the Civil War, Congress enacted the Revenue Act of 1862. In addition to a stamp tax, the Revenue Act included a legacy tax. Rates ranged from 1% to 5%, depending on the size of estate and who was receiving the bequest. After the Civil War the extra revenues were no longer needed, and the legacy tax was repealed in 1870 and the stamp tax was repealed in 1872.

In 1898, Congress was once again looking for revenue and it passed the War Revenue Act to fund the Spanish-American War. This was the first true “estate tax” in the United States, and rates ranged from 0.75% to 15%. The tax was repealed in 1902 after the fighting ceased.

Needing revenue to fund WWI, Congress passed the Revenue Act of 1916. The estate tax applied to estates in excess of $50,000 with rates graduated from 1% to 10%. This time, Congress did not repeal the tax when the war ended. Instead, the estate tax has remained in one form or another (except for 2010, when decedents enjoyed a short-lived holiday) for almost 100 years.

The period from 1916 to 1976 saw a rise in rates and the introduction of the gift tax and marital deduction. From 1941-1976, the marginal estate tax rate topped out at 77% for estates over $10 million. With the Tax Reform Act of 1976, gift and estate taxes were unified (prior to this time, less tax was paid on lifetime gifts than transfers of the same amount at death) and the generation-skipping transfer tax became a reality. The top marginal estate tax rate decreased from 1977 through 2012, and the amount that could pass free of estate tax rose.

The concept of “portability’ was introduced with the Tax Relief, Unemployment Reauthorization and Job Creation Act of 2010. Portability is supposed to make estate planning for married couples less complicated. While it offers many advantages, there are many reasons why couples may not want to take advantage of this “gift” from Congress. This will be discussed further in future issues of Sandoval’s Soliloquy. ATRA increased the top gift and estate bracket to 40% and made portability permanent.

Portability will allow many married couples with older estate plans to have their estate plans simplified. However, there are many non-estate tax reasons that need to be considered when decided what changes, if any, need to be made. Many estate plans provide for outright distributions to the beneficiary, which provides no protection in the case of remarriage of the surviving spouse or the divorce of a child or grandchild. It also provides no protection from the creditors of the beneficiary. The cost of long term care will continue to rise and many seniors are seeking ways to preserve their estates in the event the senior requires care in his or her home or an extended stay in an assisted living facility or nursing home.

Our office specializes in estate planning and elder law. We have created our 2013 Trust Tune-Up Seminar to help educate professionals and clients about these issues and many others. You or your clients can get a free DVD of the seminar by calling our office at 951-888-1460 or filling out our online request form.

Latest posts by Megan (see all)